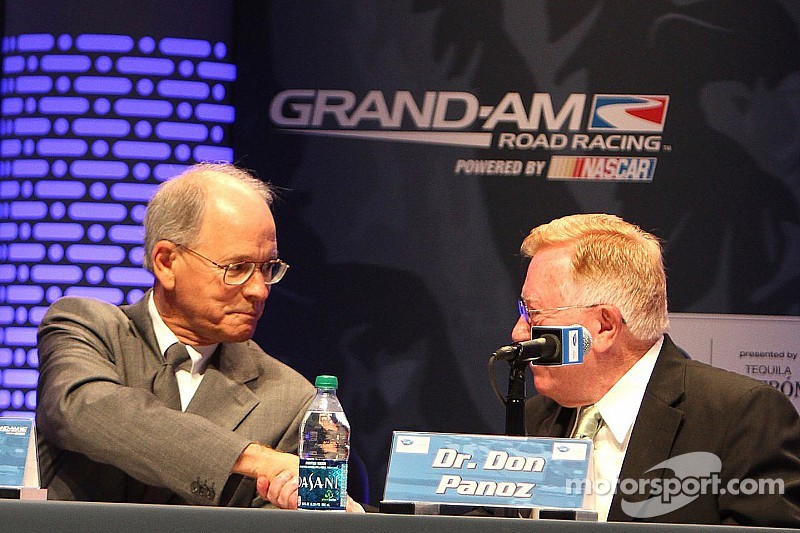 On September 5, 2012, it was announced that the Grand-Am Series and the American Le Mans Series would merge for the 2014 season, forming the TUDOR United SportsCar Championship. Jim France, son of NASCAR founder “Big” Bill France, has always been involved in NASCAR, but his affection for sports car racing has largely kept him on that side of the sport. Pictured above, France, from Grand-Am, is shaking over the deal with ALMS founder Dr. Don Panoz.

France, also president of IMSA, the sanctioning body, turns 70 later this month. He doesn’t need to work, report to his low-key office in a building a few miles from Daytona International Speedway and the NASCAR and International Speedway Corporation complex there, but he does, despite the fact that Forbes magazine filed it last week. number 307 on the Forbes 400 list of the richest Americans, with 2.1 billion dollars. (Yes, he took the lunch bill.)

But France loves racing, still loves riding motorcycles, still hates the spotlight. Unlike his late father and brother, Jim France does not attract attention when he walks into the room. His sense of humor is dry and well-delivered, and he’s been a huge, sweet comfort to Lesa France Kennedy and her son Ben, who currently race in the NASCAR Camping World Truck Series, largely because Jim made everything he could to intervene. when Lesa’s husband and Ben’s father, Dr. Bruce Kennedy, was killed in a plane crash. Bruce Kennedy was just beginning to interest Ben in midget quarterback racing at a track that the NASCAR racer Mark Martin helped build for his son, Matt. But just as Matt moved on to other interests, Ben Kennedy, with the encouragement of Jim France and Martin, started running grassroots and rose through the ranks. And now that he’s graduated from college, Ben might end up in the Sprint Cup, says Jim.

Ahead of Petit Le Mans, the final race of the inaugural TUDOR Championship season, we spoke to Jim France about how he thinks the past year has gone and what he and his team are planning for the future. to come up.

The last time we officially spoke was just before the Rolex 24 at Daytona, and you talked about your hopes for this first year of the merged series. As it comes to an end, what do you think of this season?

I feel like it’s been one hell of an exciting year. Overall, I think the merger was executed very well. We had issues here and there, but it happens when you put two shows together. We had some problems with the referees at the start, but I think we solved that problem.

Every race we’ve had has been exciting. For me, this reflects the quality of the pilots. If you have good teams and good drivers, you will have good races. We had a lot of wheel-to-wheel action. We didn’t lose anything – I think we just got better.

What was the most difficult aspect for your team to accomplish?

I think [Managing Director, Technical Regulations] Scot Elkins and his team have done a great job trying to match two totally different prototype concepts. We have some good races in the category, very close – at some tracks the races have been closer than at others. But I think there was a lot of skepticism when we announced that we were going to run the two prototypes together, and they could compete successfully, and Scot and his team accomplished that. Technically that was one of the most difficult aspects to tackle, balancing the different chassis, the different engines, the different bodies – it’s an ongoing challenge that most other series don’t have.

From a business perspective, did the merger work?

On the business side, it was a home run. The industry, especially companies interested in sports car racing, have been overwhelmingly positive about the merger. The biggest question we heard was, “What took you so long? So from that point of view, the participation of manufacturers and sponsors has been really positive. One of the most interesting things, at least from my perspective, is that research and data indicated that the fanbase overlap in both series was only 12%. When I heard that, I thought, “That can’t be true,” but we’re sure it was.

This year, I think, the number of viewers has increased, some of them significantly, so I think that confirms that we have fans of both series coming together. The consolidation of the fan base automatically made the sport grow. We are therefore very satisfied. It’s not often that when you come up with a plan — a competition plan and a business plan — to bring two competing organizations together, you see the model work the way you hoped. This one has reached all the thresholds we set for ourselves.

There haven’t been many complaints about the schedule this year, let alone next year.

We gave the tracks a year to get all the pieces together and be ready to fit together, and the way it worked was one of the biggest benefits of merging. And I think one of the major accomplishments of this year is to announce our 2015 schedule as soon as we do. For me, it was a major achievement to put this in the hands of the tracks, the teams and the fans in August. It was an important step for us.

It’s one of the best races we have right now. It’s a great opportunity for great drivers and great teams to show what they can do. It doesn’t matter if it’s the TUDOR series or the Continental series, a great race is a great race.

Do you expect more manufacturers to show up?

I don’t see many senior racing series executives walking down the pit lane during races. Despite all the beatings Tony George took at IndyCar, I saw him at a lot of races. I often see you there too.

Tony and I literally grew up in the sport. And I’ve always had a passion for it. And I still do.